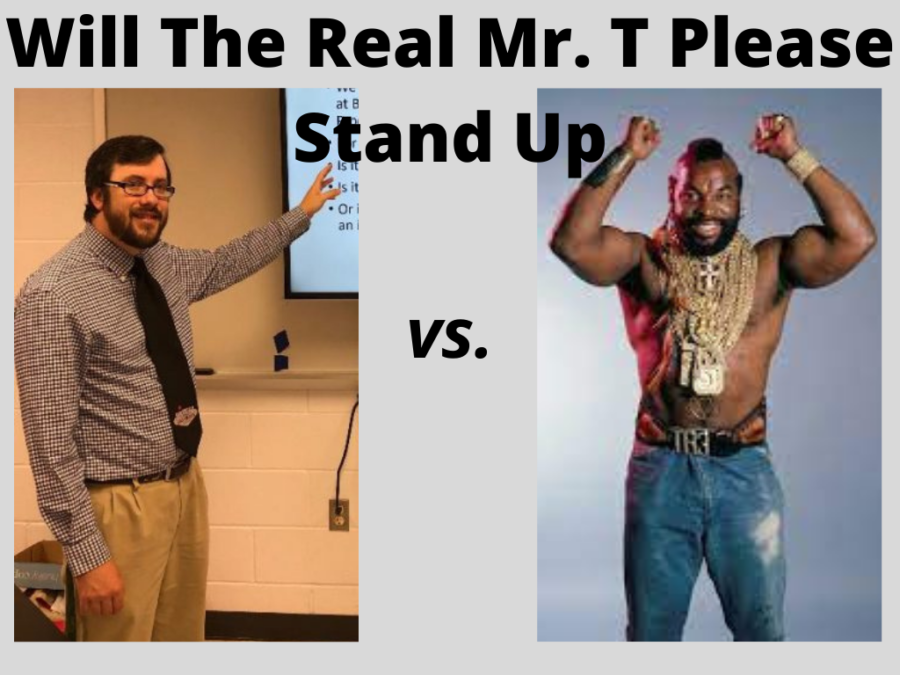 With big shoes to fill, Dominion’s Mr. T sets the bar even higher for the actor Mr. T.

I Pity The Fool Who Doesn’t Appreciate Mr. T

As my graduation date comes closer and my K-12 experience is coming to an end, there have been many teachers that come to mind when I think memorable. However, one teacher sticks out as one that was very influential in my time in school, that teacher being Mr. Throckmorton.

Going into my junior year, I noticed that two of my classes, US history and Psychology, had the same teacher. Once I got the schedule, I asked around about the teacher that goes by Mr. T. Everyone I asked who knew of him had the same response, “He’s awesome.” I was excited about this, but there is always a thought in the back of my head about what if  he doesn’t like me or my class.

As someone who the only subject they like is history, I already had a feeling that I would enjoy his class, however, I never could’ve guessed just how much I would enjoy it. Mr. T did the number one thing to make a history class fun and interesting, he encouraged discussion and thinking outside of the box. An example of this were essays that we would write every quarter, Mr Throckmorton would allow us to come up with our own essay ideas as long as the topic had to due with the U.S. and it happened in the time period we were currently studying.

He gave us these kind of liberties on every big assignment, which helped students stay engaged and put a lot of effort into the assignments. His encouragement of thinking outside of the box was very impactful for me. The only bad thing I can say about his class is that it felt like it ended too early because of COVID-19. He used this same teaching style in Psychology.

Mr Throckmorton was the best teacher I ever had. He encouraged our class to think critically and have an open mind. He allowed us to think outside of the box and encouraged conversation and debate. He never treated us like we were beneath him, he made sure that we felt like we could have open conversations and not feel like we were going to get in trouble or feel ostracized. All I can say to Mr Throckmorton is thank you, you made school enjoyable which is very hard to do. You made sure that every student got to voice their opinion. You are the best example of a great teacher. You made my time in your classes fun while still teaching me. Once again, thank you.