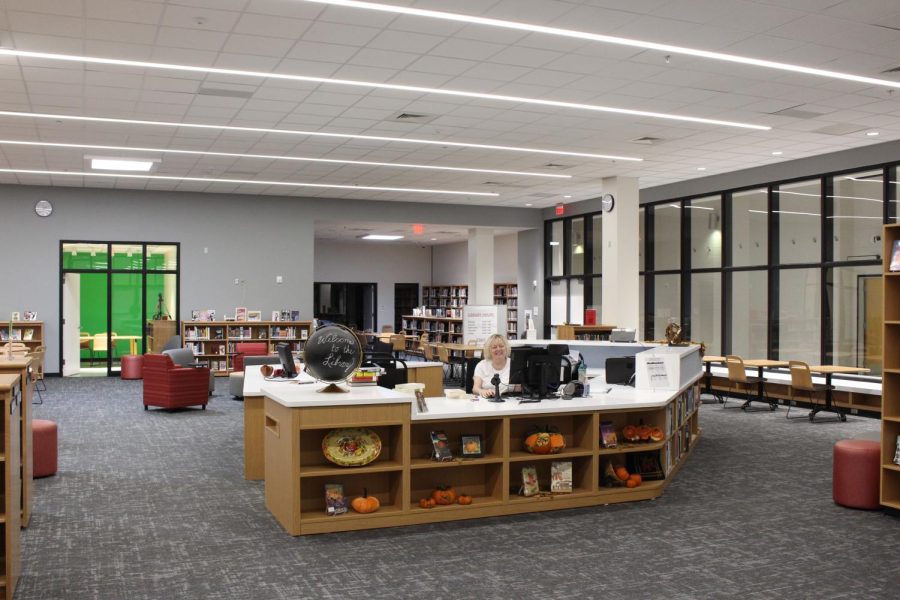 Hard at work preparing for the opening, Media Center specialists are excited for the positive changes for students.

The 2022-2023 school year has started off with a lot of change for students. Not only have the bell schedules and lunch times been moved around, but the school’s media center, front office, and counseling offices have been renovated and relocated.

Students and staff have utilized the temporary media center since March of last year, located in room 413A,. As the construction progresses, the opening of the new Media Center is almost upon the school.

Having to work in the smaller space has been difficult for Media Center specialists like Mrs. Tracy-Hitrik and Ms. Le, who recognized the struggle compared to being in a large library. “We only had 3,000 of our books available to us. So when students were trying to work on a research project, we were limited because the other 20,000 books were in a storage facility,” Ms. Le said.

Only having a small amount of their books accessible, the media center specialists resorted to using online tools to help out students. Some students found this to be easier, while many others preferred using old-fashioned books. “There is a misunderstanding out there, all over the country. And even with educators, they think that because things are online, you don’t need a lot of books. But we see more and more classes and more and more students asking for them,”  Le said.

While the media center specialists have been able to work in the temporary space in room 413A, they’re eager to return to a permanent location.

Luckily, according to Mrs. Tracy-Hitrik, they won’t be stuck using the temporary space for much longer. “We’re hoping to reopen October 1st. Even though it looks great right now, there’s still a lot that they’re working on. There’s always issues when you have construction, and they’re doing a phenomenal job. They’re working as hard as they can to get it done and make it look beautiful and wonderful for the students when they come in,” Tracy-Hitrik said.

The new media center is a massive improvement over the previous one. Once it’s finished, it will have multi

ple skylights and windows, phone chargers, many seating areas, and a classroom area that will be completely separated from the rest of the room, which will make it easier to teach classes without disturbing students trying to study.

Media center specialists are thrilled to be going back to a large space, and they’re especially excited about how it will affect students who will regularly use it. “I like the fact that there’s a little bench for the students to sit on along the wall. There’s a bench on the outside of the library, and there’s one on the inside” Tracy-Hitrik said.

As always a smiling face will be greeting students when they enter the Media Center. “We’re excited for the new space and we’re excited to be able to welcome you guys back home to our library,” Ms. Le said..