A Bright, New Look Coming To The Main Gym

The lights and scoreboard will be replaced in the next few months. 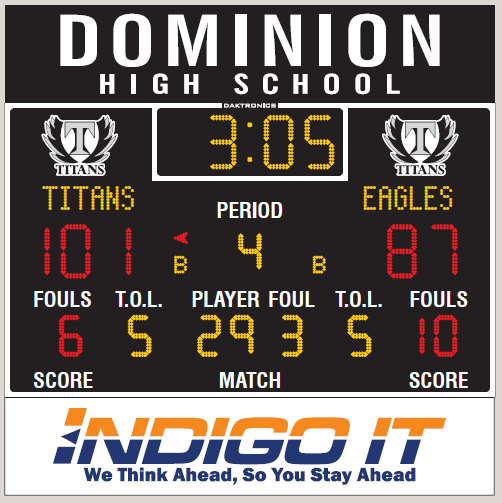 The new scoreboard will be ready to go by next fall for volleyball.

As Titan athletes continue to showcase their abilities, they will see a new look in the main gym in the coming months.

Starting in the next few months, new lights and a new scoreboard will be put in the main gym. This comes over a decade and a half of the same lights and scoreboard. As stated by athletic director Dwayne Peters, “it was time to get it.”

“The first thing I saw was the scoreboard, lights were going out, and the scoreboard, things would start breaking and they can’t get the parts for them anymore. So basically, if a light goes out, a ball goes out or some part doesn’t work anymore, we can’t order it until we replace because the scoreboard’s been here since school has been open so that’s almost 20 years ago,” Peters said.

However, these new enhancements won’t come without a price. Per assistant Athletic Director Anne Gasser, the scoreboard looks to be over $20,000, while the lights are estimated to be anywhere from $600-$800 each.

It’s clear that the school was looking for some upgrades, and it looks like they are getting just that. According to Peters, the scoreboard was funded by a private donor through the Titan Athletic Booster Club, while LCPS will pay for the lights.

When asking the Booster Club, they said they were encouraged to raise funds for the scoreboard as the county could not afford new ones. “We were fortunate to have local company, Indigo IT, owned by two Dominion parents, step up to make this investment in our school. Their generous donation of $23K allowed us to purchase two new scoreboards in January.”

Gasser says they were actually a bit behind schedule on making these renovations. “The gym lights are just something that needs to be done every five to six years on an on a normal basis, just you know, keep it so that it’s adequate for, you know, operation, and whatnot. So, the scoreboard was something it was kind of like on our wish list that we knew that it was something that we needed to start looking at.”

In terms of a timeline, Peters says the lights are already at the school, but can only be put in place on a weekend or when no one is in the gym so classes or sporting events won’t be interrupted. As for the scoreboard, he says it has already been ordered and the company sponsor will take care of it, presumably by spring break when no activity will be going on in the gym.

Collectively, Peters and Gasser said these were some of their goals to raise the bar of Dominion athletics and catch up with some of the other schools.

“The next thing is we’re goint to hopefully get [new] scoreboards for outside for the baseball and softball fields. Then hopefully press boxes for baseball and softball fields…but we’re slowly improving the school because like I said things are starting to wear a tear and it’s time to replace them with big expensive items,” Peters said. Per LCPS, the press boxes are slated to be installed sometime between 2023-2025.

“We also have in our future plans, we want to get a new scoreboard for the auxiliary gym because it’s the same thing. It’s you know, 20 going on 20 years, and it’s still operational, but it’s just a little outdated. And we have to replace the bulbs and that pretty often. We’d also like to get a new scorer’s table. We’re always looking for different projects that enhance the athletic facilities, but those are the main ones that we’re focused on,” Gasser said.

Additionally, a new wall of fame was just put in place in the main gym as another minor project.