Students Walk Out In Response to Sexual Assault Cases in LCPS

With two highly publicized sexual assault cases in Loudoun County Public Schools, students walked out across the county today before what is sure to be an explosive School Board meeting tonight. 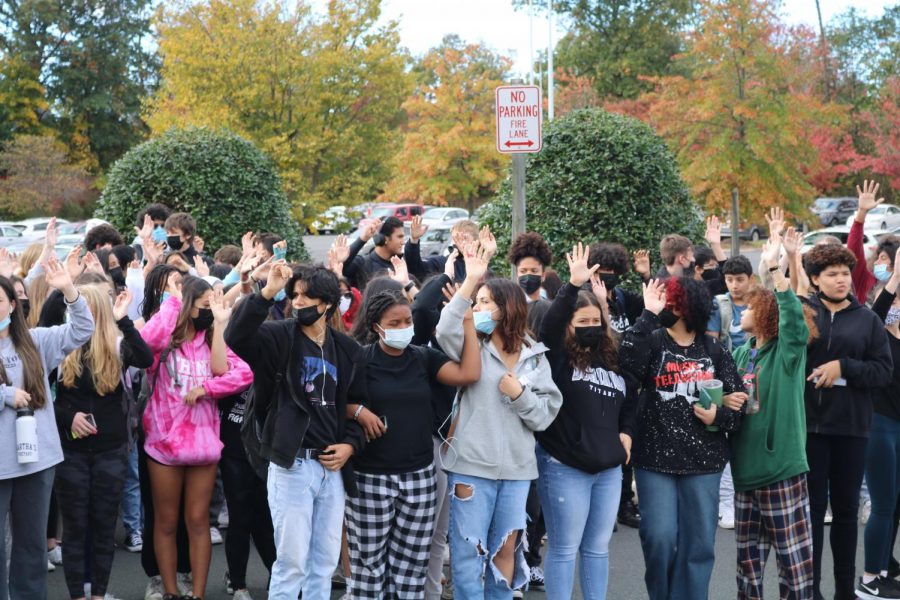 Raising their hands in support of sexual assault victims, students spoke, shared their own stories and chanted in what as a larger than expected protest.

At 10:45 this morning around 200 students walked out of Dominion for a protest that lasted almost two hours before the last students returned inside the building. Students spoke out against sexual assault, shared their personal stories and chanted, during the protest that was held at every high school in Loudoun County. Some protests lasted just the ten minutes that was asked for in the Facebook post and the number of students participating varied across the county.

Believing LCPS failed as a school system, senior Olivia Rose wants to see them tighten their rules. “LCPS did a poor job of preventing a sexual assault. LCPS needs to make sure that this never happens again and establish more safety guidelines. We need to put more strict restrictions,” Rose said.

Loudoun County Public Schools has come under fire for its handling of two sexual assault cases at two different schools that involved the same student accused of committing the crimes. Just yesterday he was convicted, according to The Washington Post, of the first assault that was at Broad Run on May 28. The student will be sentenced after the second case is concluded.

These cases brought about a call for a county-wide “walk out for 10 minutes to show solidarity to victims of sexual violence and demand safety in our schools,” according to a post on Facebook.

Alison Perez, who walked out at 10am by herself, was very clear on why she wanted to walk out. “I believe that everybody has a right to be respected and not be disrespected,” said Perez holding up her “no means no” sign.

Tonight’s School Board meeting will surely bring about heated public discussion on this topic. Samantha Crim said, “I actually hope that they (LCPS School Board) say they were in the wrong and that they were like we need to do something about this. They really do.”

Wondering how this still happens in school, Destiny Hall said, “It’s just more of like, why are we still at this point?” In 2018 three football players were charged at Tuscarora for a sexual assault that took place in the locker room with the victim being a fellow football player.

Assistant Principal Jamie Braxton, who was outside at the time of the 10am walkout, said, “[the school administrators] wanted students to have an appropriate avenue to express their support and we wanted to make sure that everyone was safe.”

Thinking about his family at home, senior Devin Freeman said, “We need justice for these women. I got a sister, I got a mom, I would hate for something to happen to them, so the more notice we can get about it the better.”

Upperclassmen were not the only ones sharing their opinion in front of the protest, sophomore Lindsay Fox expressed that it is not fair and people have a choice.“ So many people have been victimized. It’s not fair for them to be pushed to the side and not be equal to anybody else. I want people out here to know that it’s okay to talk to people and to still be confident in yourself,” she said.

Perez was hopeful for a future turnout that was higher. “I hope that next time, if there’s another walkout, more people will come out and protest what they believe,” she said.

Below is the message sent from Dr. Brewer to the Dominion community Monday afternoon. It is similar to one sent by all principals in the county:
Loudoun County Public Schools and Dominion High School are aware of social media posts regarding a student walkout demonstration proposed for Tuesday, October 26. I want to take this opportunity to share some information about how this situation will be addressed at Dominion High School.
First, the top priority of Loudoun County Public Schools is the safety and security of students and staff. Keeping this in mind, Dominion High School will provide a designated, safe space for students to exercise their freedom of expression. Administrators, school security officers and school resource officers will be on duty should a walkout occur. The designated walkout area for our school is the spirit rock.
With freedom comes responsibility. Dominion High School will provide a supervised environment for this protest. Students who choose to participate will not be penalized for their participation; however, we do ask that students who participate do so peacefully, without signage, and in accordance with the Students Rights and Responsibilities we all reviewed and signed at the beginning of the year.
Thank you for your attention to this matter. If you have additional concerns regarding this walkout, please contact me at [email protected].
Best wishes,
John Brewer
Principal