Come on SCA. You Can Do Better. 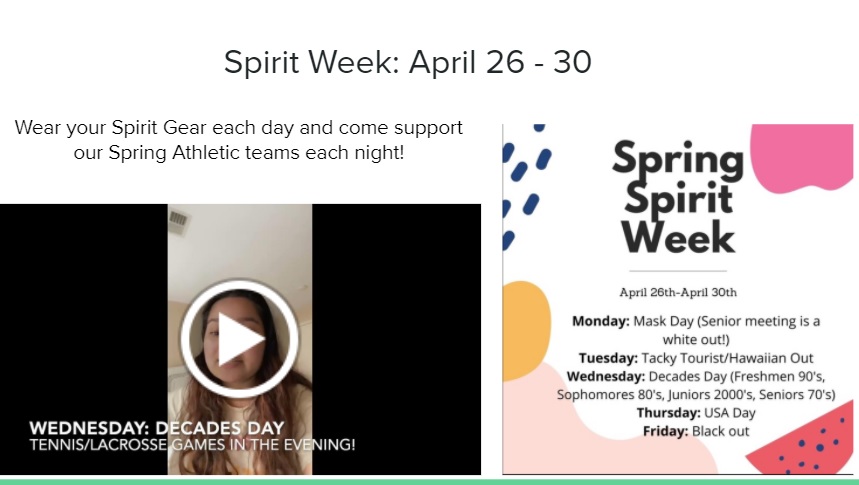 The slide presented to students during Advisory on Thursday promoting Spirit Week.

In the midst of a dramatic increase in acts of violence against Asian-Americans, during the trial of Minneapolis police officer Derek Chauvin for the killing of George Floyd, at the same time as the killing of unarmed Black man Daunte Wright by another police officer in Minneapolis, three months after rioters stormed the Capitol on live TV, at a time when political tension over the COVID-19 pandemic and vaccines is higher than it has been since the election, SCA has chosen “USA Day” as one of the spirit week themes this month.

Needless to say, traditional American imagery is somewhat of a controversial thing right now. Regardless of where they may fall on the political spectrum, any reasonable person can understand that promoting dramatic patriotism within school in the current national political climate is divisive at best, and hurtful at worst.

However, I don’t necessarily blame my fellow students as much as I blame the adults around them who presumably approve these types of plans. SCA is primarily composed of 16-18 year olds, who are frankly not always the most sensitive and aware demographic (which I say, as an 18 year old myself). That is why we have adult sponsors, who are supposed to know better and be able to spot potential issues like this.

I think what I am most irritated by is the fact that this whole situation could have been avoided with just a touch of creativity. USA day is such an old worn out idea, recycled what seems like every single year that I have been at Dominion, and SCA could have easily thought up something new instead. With just a little bit of thinking outside the box, with just a little bit of care given to this whole scenario, this awkward faux pas never would have happened, and I would have gotten to write an editorial on something much more fun like a cookie shop or the new Godzilla vs. Kong film, instead of once again expressing my disappointment with my student leadership.

I’m sure that most people reading this are thinking something along the lines of “Well, they probably just weren’t thinking, it’s not that deep.” But that is exactly the issue: they probably were not thinking about it, at all. That is literally the entire job of SCA and the adults that approve these though, to think about these types of things, and to promote unity and cohesion and camaraderie within the student body, and once again they have missed the mark.

The SCA had this response: The students were given the freedom to think of groups they wanted to honor in the community, and one of them was our veterans.  In addition, USA colors as part of our spirit week has been a tradition, and the seniors are trying to salvage what they can during a year of restrictions that has made community-building so challenging.