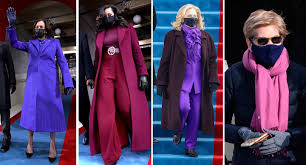 Watching the Inauguration of Joe Biden, I couldn’t help but fascinate over the multitude of different fashion statements that strutted through the Capitol.

Purple, a color that was worn by many powerful women, wasn’t just a coincidence. Madame Vice President Kamala Harris, former first lady Hillary Clinton, former first lady Michelle Obama, and Senator Elizabeth Warren all wore shades of purple. Purple often symbolizes unity and nobility, but is also a symbol of bipartisanship, as it is a mixture of Repulican Red, and Democrat Blue.

When I first saw all the purple, I thought it was just a coincidence. Later that day, I saw a TicTok where it was a quote of Trump saying “No one looks good in purple”, followed by all the powerful women in their inauguration outfits. Honestly, I believed it at first, but then I went into further research about the colorful outfits. This showed me that I need to not believe everything I see, and that I need to find and research for the truth before forming an opinion.

The purple outfits also symbolized the woman suffrage movement of 1913, as it represented “the royal blood that flows in the veins of every suffragette.”

Kamala Harris chose a violet dress and coat, which pays homage to Shirley Chisholm, who was the first ever African American woman to run for president in 1972.

Other than the powerful woman sporting purple, there was a monochrome theme going on. Joe Biden’s granddaughter Naomi, wore all white, a nod to the suffragettes.

A person who didn’t have a lavish outfit, but still stole the show was Bernie Sanders. Sporting a practical jacket, that isn’t new as he has been seen in it throughout his campaigns, was also wearing big mittens that had actually been gifted to him from a second grade teacher in Vermont, and were made out of recycled wool sweaters and plastic bottles. The memes that have circulated around about his attire are so funny.

Wednesday was an extremely influential day for history, as well as fashion. This day really showed me how important researching information to gain the truth is, instead of believing everything I see on social media.