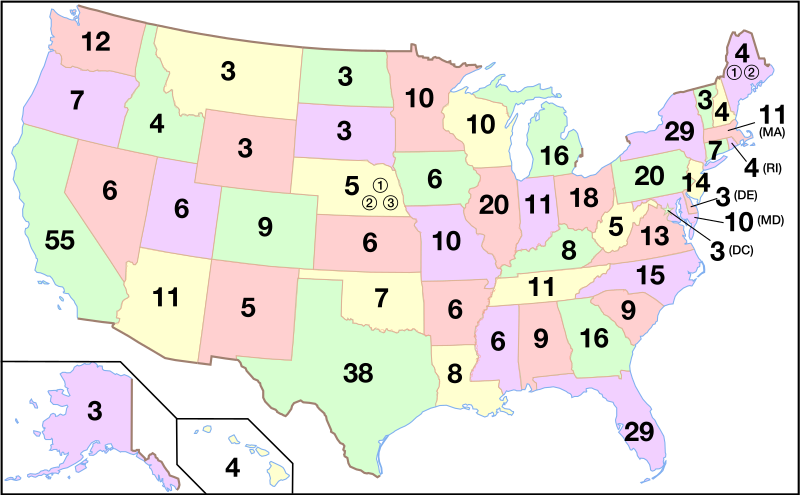 The next President will be decided by the electoral college- as seen here on the map.

The Electoral College is a collection of representatives, called electors, chosen by the states to elect the president. Though many voters may not think of it in such terms, their votes on election day are actually a poll to inform their state’s electors of their support for a particular candidate, not a vote directly for that candidate.

The controversy of the 2016 election has prompted an increased interest in the Electoral College leading up to this year’s election, as many people are concerned that president Trump may win re-election without a majority vote, as he did in 2016. Google Trends data shows that web searches related to the Electoral College have dramatically risen in the last year, in anticipation of this November’s important election.

Each state is allotted a certain number of electors equal to the combined number of senators and members of the House of Representatives for their state (in the case of Virginia, 11 representatives plus 2 senators, so 13 electors) and is given freedom to determine how their electors are chosen.

In 48 states and the District of Columbia, electors vote in a winner-take-all fashion. This means that whichever candidate wins the majority of the popular vote within that state, wins all the electoral votes for that state. Two states, Maine and Nebraska, use a proportional system, where candidates are given a proportion of the state’s electoral votes according to the proportion of the popular vote which they won.

Controversy over the electoral college has grown in recent years, due to the fact that because each state receives a minimum of three electoral votes (because each state has a minimum of one House representative and two senators in Congress), regardless of their population, very small states’ populations are overrepresented relative to larger states. This allows for the possibility of a candidate losing the majority of citizens’ votes nationally but still winning enough electoral votes to secure the presidency.

Indeed, this has occurred 5 times in the country’s history, 3 times during the 19th century, and twice within the last 20 years. In 2000, former Vice-President and Democratic candidate Al Gore won the popular vote by more than 500,000 votes, but failed to win a majority in the electoral college, losing the presidency to Republican candidate George W. Bush. In 2016, former first lady Hillary Clinton won the popular vote by over two million votes, but now-president Trump won the electoral college, succeeding in his bid for the presidency.

However, for the foreseeable future the electoral college is likely to persist. Removing it would require an amendment to the Constitution, which is a long and difficult process, requiring the consent of at least two thirds of all the states.

During the 18th century, the majority of Americans were fairly uneducated and disconnected from each other, which led the founding fathers to believe there was a possibility for a dangerous radical leader to spring up and gather enough support to win a simple majority vote. Therefore, the Electoral College was conceived as a body of more educated and knowledgeable representatives who would vote on presidential candidates, keeping the opinion of their state’s population in mind, in order to prevent the general populace from electing any leader that would be too extreme or risky.