As the last debate approaches Thursday, take a look back at the key points made in last week's town halls. 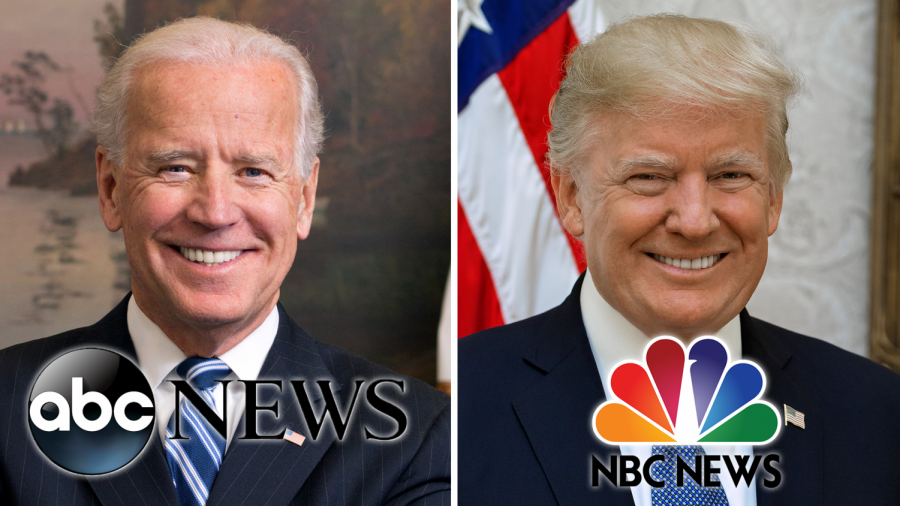 Biden and Trump hosted town halls at the same time last Thursday, addressing questions for the host and voters.

After President Trump backed out of the Second Presidential Debate, following the commission’s announcement that the debate would be going virtual, Former Vice President Joe Biden Committed to a 90 minute ABC News Town Hall in Philadelphia on the would be Debate Night, and President Trump quickly followed with a 60 minute NBC News Town Hall in Miami on Thursday, October 15. Both candidates were pressed hard on key issues and given opportunities to clarify past statements and positions that had previously left voters confused about the views of the two presidential hopefuls. It is important to note that this is not a line by line fact check of the Town Halls, but that both candidates did make false or misleading statements during their events. Multiple Fact Checks will be linked at the bottom of this article.

First, The Biden Town Hall. By 2020 standards, this was a fairly policy heavy event, especially by comparison to the widely rebuked Presidential Debate two weeks ago. The first topic of the evening was COVID-19, which Biden used as an opportunity to repeat his attacks on what he sees as a failed response to the Pandemic by the Trump Administration. Unsurprisingly, he targeted Trump’s inconsistent support for mask wearing, though Biden himself was unclear on whether he would support a universal mask mandate.  When pressed about whether or not he would shut down the country if elected, Biden remained noncommittal, saying that he would listen to the opinion of scientists. Interestingly, Biden was asked about mandating a vaccine, once one is available, and responded by saying that it “depends” on the nature of such a vaccine.

During a segment on racial inequality, The Former Vice President had repeated much of what he has said in the past about his plans for building a more equitable future for African-Americans specifically. During this segment, Biden was pressed by both a Town Hall Participant and moderator George Stephanopoulos on his past support for the 1994 Crime Bill, a law many have criticized for having a disproportionate impact on African Americans.  During the exchange, Biden admitted that supporting the crime bill was a mistake, saying “yes, it was,” though he did also claim that the bill had more support in the Black Community at the time.

Biden also attempted to shift some blame on the issue, arguing, “The mistake came in terms of what the states did locally.” Regarding other criticism of the Crime Bill, a member of Biden’s campaign later tweeted that he was referring to the 1986 Crime Bill, only adding confusion about Biden’s stance. When asked about police reform, Biden clarified his position stating, “We shouldn’t be defunding cops, we should be mandating the things that we should be doing within police departments, and make sure there’s total transparency.”

The Supreme Court was arguably the most important and most revealing topic of the evening for Biden. First, When asked by a participant on what Amy Coney Barrett’s nomination could mean for LGBTQ and Women’s Rights, Biden said that he didn’t think Barrett had clearly laid out her judicial philosophy. He highlighted the danger he believes Barrett’s nomination presents to the Affordable Care Act (aka Obamacare), and reiterated his position that SCOTUS Nominations should not occur during an election year describing them as “inconsistent with the constitutional principles.”

Pressed again on whether he would add seats to the Supreme Court, Biden still did not give a definitive answer stating, “It depends on how much they rush this,” referring to Barrett’s nomination proceedings, he did provide some clarification. Biden expressed that in general he was not a fan of court packing, and when pressed on whether he would give a clear answer before election day Biden stated “yes, depending on how they handle this,” still not a commitment, but closer than any journalist has gotten before.

Likely one of Biden’s high points during the evening was when he was speaking on partisanship, in government. Biden sought to present himself as the candidate to unite the parties, as he has done throughout much of the campaign, by stating that “grudges don’t work,” and expressed his optimism about his ability to return the country to an era of bipartisanship. Biden also cited his work as Vice President on the Cancer Moonshot Initiative, and touted the bipartisan support relating legislation had received. He also mentioned how Mitch McConnell, a Republican hardliner, even named the bill after Biden’s son Beau, who died from a brain tumor in 2015.

Interestingly, towards the end of the Town Hall a participant asked what he would do not if he won, but if he lost. Specifically, Biden was asked how he would use his platform to push the Trump Administration on issues such as Racial Justice. In response, Biden says that he thinks that’s “very hard,” but said that he would return to his university job teaching about decency and honor. He did quickly shift though to say that if he were elected, “You will hear me try to unify.” Finally, when asked what a loss would say about himself, he responded with “[it] could say I’m a lousy candidate.”

The Trump Town Hall by contrast went down quite differently. Those seeking to hear more policy from the President than at previous events were likely left disappointed. Trump appeared to utilize this Town Hall to reiterate much of what he has already said on the campaign trail, and also attack the network hosting the event, NBC.  Unlike the ABC News Town Hall, this Town Hall had much more involvement from moderator Savannah Guthrie, who began with questions for Trump on his COVID diagnosis.

Trump himself said initially that he “feels great,” and when asked about his symptoms, he denied having pneumonia, but also said his lungs were “a little bit perhaps infected.” Trump was also pressed on when he had last received a negative test, and whether or not he had been tested the day of the Presidential Debate, to which Trump responded “I don’t know, I don’t remember.” He would go on to say that he probably was tested before the debate, but also admitted that he is not tested every day.

Trump was also pressed on his inconsistent support for mask wearing, and while he did state, “I’m good with masks” during the exchange, he also attempted to cast doubt on the efficacy of masks by claiming that 85% of people who wear a mask catch COVID, which according to a tweet from the CDC the day before is an incorrect interpretation of the study’s findings.

Arguably the lowest point of the Town Hall was when Trump was pressed on the issue of white supremacy and relating conspiracy theories. On the issue of White Supremacy itself, an issue Trump has issued conflicting statements about in the past, Trump stated “I denounce white supremacy” multiple times before quicky pivoting to “denouncing” Antifa and “the radical left.”

However, the evening took a turn for the worse when Guthrie gave Trump the opportunity to denounce QAnon, a grossly unsubstantiated conspiracy theory group, Trump stated that he knows nothing about the conspiracy theory or the people who support it, though he did also say that he does know they are “against pedophilia” a sentiment he says he supports, something that could be characterized as a defense of the movement, which the FBI has classified as a domestic terror threat.

In a segment that began on income tax, Trump was asked to justify this decision to lower corporate income taxes as a part of an overhaul made to the tax code under his administration. Trump claimed that the corporate tax cuts brought back auto manufacturing to the U.S. and touted the job creation that he claimed came as a result. In response, Biden’s plan which calls for raising income taxes on corporations and the wealthy, Trump claimed that Biden’s tax plan would create a “depression,” without evidence.

Trump was also pressed on the New York Times report that alleged among other things that Trump owes $421 million in debt. In response, Trump claimed that the debt was only a “tiny percentage” of his total net worth. More broadly, Trump was pressed on why he wouldn’t release his tax returns when an audit would not prohibit him from doing so. He responded by saying “common sense” and potentially his lawyers would stop him from doing so and went on to falsely accuse NBC News of wrongly reporting he was never under audit.

Arguably one of Trump’s high points of the evening was when he was questioned about the Supreme Court nomination of Amy Coney Barrett. When asked about Trump wanting to see in a Barrett nomination, he did attempt to assuage concerns about what his opponents have charged as “court packing” to produce a favorable result on key issues.

First, Trump stated that he doesn’t see a conflict of interest for Judge Barrett in a potential election, stating that has “no idea” how Barrett would rule. The President went on to say he had not spoken with Barrett regarding Roe v. Wade, the landmark decision that struck down abortion bans across the country, and event went so far as to say, “I think it would be inappropriate to talk to her about.” Regarding a potential case involving the election, Trump also said “I never talked to her about it.”

Towards the end of the Town Hall, Trump was questioned on how he would address police brutality. When asked about how to better prepare law enforcement to work better with black communities, he pointed to a bill proposed by Republican Senator Tim Scott, that ultimately failed when Senate Democrats argued it didn’t go far enough and blocked the bill, as Trump pointed out during the Town Hall. Trump claimed he had done more for African Americans than any president since Lincoln during that exchange, apparently leaving out Lyndon B. Johnson who signed the Civil Rights Act of 1964, and Voting Rights Act of 1965.

Finally, a participant asked Trump about whether or not he would cut DACA (Deferred Action for Childhood Arrivals) a law that protects undocumented immigrants brought to the U.S. as minors from deportation. Trump responded saying, “We’re going to take care of DACA, we’re going to take care of DREAMER” though it is unclear what he meant by that. Trump quickly pivoted to tout his hardline immigration policies, claiming that they have built over 400 miles of border wall, a claim that has been widely disputed. The last question Trump was asked was about how he would improve in his second term, and responded with “Because we’ve done a great job.”

Both Town Halls did provide some new insight into candidates, though ultimately these Town Halls did more to highlight the different styles between the two candidates, with little new information or talking points. With millions of mail-in ballots already cast, it is unlikely that these two town halls will have a significant impact on the outcome of the election. For more information on the Town Halls, please refer to the Fact Checks linked below.