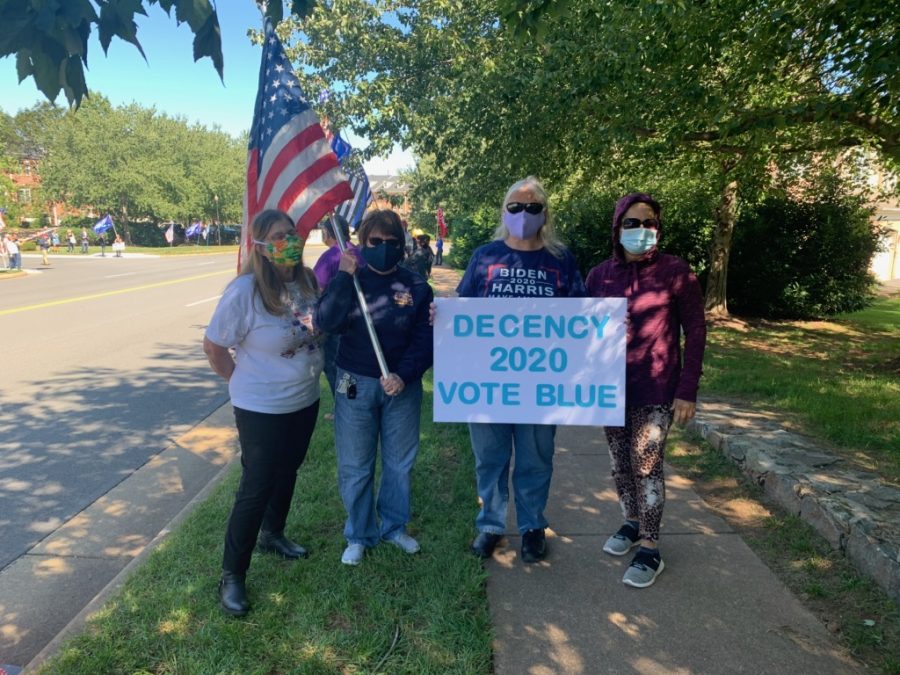 Lowes Island has become a popular protest area on Saturdays, as seen by the four women in the picture, when President Trump visits his golf club.

In the past 1,342 days of President Trump’s presidency, he has spent 279 days at golf courses, 96 of which at Trump National Washington D.C., located in Sterling, VA, according to www.trumpgolfcount.com.  As his motorcade arrived Saturday, he was met with countless protesters and supporters, making Lowes Island, a once quiet neighborhood, more and more rowdy each visit.

On Saturday, September 20th at 10 a.m, cheering was being heard along Lowes Island Boulevard as supporters anticipated President Trump’s arrival to his golf course. A military truck pulled in, along with the notorious “Trump Jeep”, which waved flags reading “Latinos for Trump” along with “Blue Lives Matter” and “Women for Trump.”  As the President’s security detail escorted the President into his golf course, the street divides up, the closest sidewalk to the golf course being the Republicans, and the parallel sidewalk is intended for the Democrats.

Many of the demonstrators were not wearing masks, most of whom were Trump supporters. Their reasoning for not protecting others by wearing a mask was that they were outside. Protesters were screamed at to take off our masks with mask-wearers replying back with reminding them that the world continues to be in a global pandemic.

During the President’s entrance, cheers of both excitement and anger filled the Lowes Island community area. After the entrance, demonstrators left and came back around 12 p.m to prepare a few hours early for his exit. The Republicans arrived first with their signs that read “Trump 2020”, and “Fill that seat”, referring to the recent passing of Supreme Court Justice Ginsberg this past week as the Republicans hope to replace the spot on the bench immediately.

Eighteen wheelers and Jeeps started to parade up and down the boulevard around 12:30 p.m.. We spoke with Roger Cole, a former soldier, a “ Strong Christian”, and one of the two drivers of the Harley Davidson 18-wheelers who represent themselves as Republican. “I salute the Office of the Presidency. He’s right in our midst, if Obama was coming in here, and this was his golf course, I would salute him as well,” Cole said. “I’m supporting him as if he’s Jesus himself. I mean, I’m a strong Christian. And if that was Heaven, I’d be, you know, supporting him,” Cole concluded.

Savannah Nelson, a senior at Dominion, has the demonstrations going on just meters outside of her house. “You know, the neighborhood doesn’t only have Trump supporters, I feel like I’m one of [the only] liberals in this neighborhood,” Nelson said.

The neighborhood is often “woken up at 9 a.m by the eighteen wheelers, beeping their horns,” Nelson said. For those just watching from the protests from the sidelines, “so many people [in the community] complain about it, that it’s just ruining our neighborhood,” she concluded.

As time went on, more protesters were showing up. Two peaceful demonstrators came in costumes, one in a Ruth Bader Ginsburg costume, and another in a “baby Trump” blow-up suit. This lightened the mood and calmed some of the crowd’s nerves, but also made some people irritated.

Prior to the arrival of those opposing Trump, the supporters took up both sides of the boulevard. One supporter, who asked to remain anonymous, said, “Seeing all the [Democrats] saying that he has to die and stuff like that, just totally wrong.”

Brittany Short, who was with a group of frustrated protesters holding signs, agreed with Nelson that she wanted to have more liberal representation in Lowes Island. As a first time protester, Short said, “I don’t mind the [Trump Supporters], I just wish that everyone was wearing masks. You know, so we could all protect each other.”

Amid the conversation, as the preparation continued from the President’s exit, Trump supporters screamed, “Four more years of liberal tears!” Multiple arguments broke out, and many intended messages of racism and ageism were said.

Trump left the golf course around 4:15 pm, much later than his usual 2:00 pm departure.  As the right side cheered of excitement, the left side booing, they hope to repeat the same routine the following weekend.

For the past few years that Trump was in office, there would be a few protesters outside the golf course, however in the weeks leading up to the Democratic National Convention, though, there have been more protesters showing up, and even more supporters as well. At the protests, multiple residents of Lowes Island expressed their anger and said that they are upset due to the constant noise, but also because some protesters and supporters are disrespectful.

These protests aren’t always peaceful. So far, in the past two months, whenever President Trump has come to golf, supporters in Jeeps have begun to drive up and down Lowes Island Boulevard with MAGA flags. They drive almost the entire time he is golfing, and park only when they are low on gas. This causes a multitude of problems since they choose to park in private neighborhoods.

Eighteen-wheelers would also often drive by and push their exhausts to the point where the smoke would cover the protesters.

Protesters’ safety have previously been put at risk, and when one of the Jeeps broke a woman’s flag, the Loudoun County Sheriff’s Office implemented the use of orange cones in order to set boundaries and protect the safety of the people.

Update: The article was corrected in that Trump did not have his window rolled down.

Update: The picture below was sent to us by a reader, Hunt McMahon, showing a screen shot of a video in which McMahon contends the flag being broken was the fault of the protester, not the jeep.