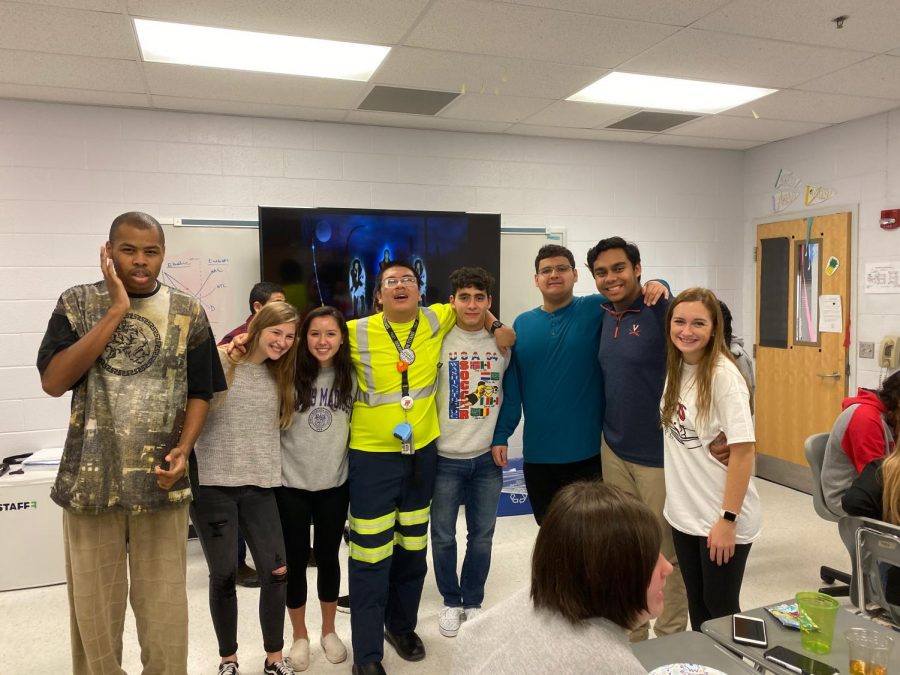 Katelyn Newell (Second from the left) and other SCA members at at SCA and Best Buddies program breakfast.

Katelyn Newell is a senior has been the SCA president since she was elected at the end of last school year.

I am not sure about freshmen, but I know that sophomores are able to apply. They have to fill out an application and interview. This year no sophomores applied but we actually do really like when sophomores apply because each year more kids are coming in, some old and some new, which is perfect for SCA. This coming year we will definitely reach out more because the more kids we have, the better it is because we get to have interviews and see who would be a good fit for SCA.

How do you plan to get the student body to attend more sporting and fine art event since it is $6 admission now?

That definitely will be a challenge but SCA is going to work really hard by promoting it and really  talking about how we want to support our school and support our fellow athletes and performers.

When and why did the school decide SCA should be a class rather than a club? Is it more effective as a class? Why or why not?

I actually was in the class last year, but I wasn’t in it freshman or sophomore year, so I was never in it when it was a club. It is definitely more effective as a class because when it was a club there was around 100 kids in it and it was just a really big club. It wasn’t really successful because there was a lack of communication and it is just easier to have a smaller group do it and really work hard because we have that hour and a half to work on leadership stuff but also SCA stuff so we get closer and can work better together.

What ways do you inform the student body of what is happening? Is it effective?

We use the announcements, we also try to post on social media including our personal social media accounts, and also use word-of-mouth. Also, in Link Crew we have a lot of SCA members, so during lessons there is an easy way to communicate information to younger students.

Did you understand why some students were upset about the Country club vs Country Bum spirit day? Why did you think it was a good idea for a spirit day?

The initial intent was to combine flannel and jeans which we usually do, and then also dress to impress. We wanted to make it an or spirit day. We have done Mathlete versus Athlete in the past so we thought it was a cool way to combine all of that. It was a misunderstanding, we never meant to offend anyone, we were just trying to create a play on words. But we took down all of the flyers, changed it (Country vs. Country Club), and we want to promote it to the school and we believe it could be a really fun day.

Does SCA matter? Why do you think that?

Yes. I think SCA is really important because without any school spirit, or people to look up to do announcements it would be very boring and we actually do a lot behind the scenes that a lot of people don’t know about. But SCA really brings our school together and makes it feel more like a community. We run all of Homecoming and stuff, and that could be the highlight of some students’ high school career.

Would you encourage people to apply to SCA? Explain.

Definitely. I think SCA is a great thing because you really can see your work happen and it’s an easy way to create change in the school. We do have an interview process and an application, but you can talk to your counselor about that. The cap for the class though is 20 students so if there is a lot of applicants, Mr. Burns has an interview process. But we really want to get kids from all different grades, and have more diversity.

What are you planning on doing to encourage others to run for SCA president next year when you graduate?

At the end of the year we usually start talking about running for different positions so we have an officer team. It is really important because we like having competition, last year was the first year in a while that we did have competition, and it really helps the students help see what each candidate can do for them and they can vote for someone they relate to.

What are yours responsibilities as the SCA president?