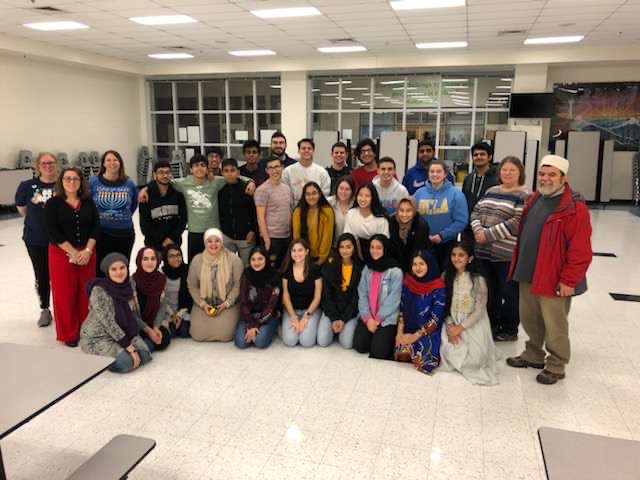 The JSU and MSA came together for their 2nd annual dinner.

With the current year coming to a close, both the Jewish Student Union (JSU) and the Muslim Student Association (MSA) continued their new traditions of having a joint dinner to reflect on the year and to welcome in the holiday season. Occuring on December 16th in Dominion’s cafeteria, members of the JSU and MSA as well as students who wanted to attend the dinner, put aside religious differences to share to share food and customs that are distinctive of the two religions. This is the second-annual dinner that has occured.

Akil Tareque, President of the MSA, said, “Both the Muslim and Jewish faith have suffred a lot of pain recently. We have these dinners as a way to come together and to show our support to each other’s religions so that people know we do love each other.”

The dinner revolved around setting aside religious differences to come together as a school community. Miriam Gorbach, a member of the JSU, said, “We wanted to show the community and members in each club just how similar we all are. That even though there are politics and war, our roots are very similar.”

Both clubs recognize the importance of the holiday season as a time for coming together. When referring to why the dinner was held now, Gorbach said, “Hanukkah begins next week and Eid doesn’t start for a while, but the holidays signify the coming together aspect of religion.”

At the dinner, students ate traditional holiday foods that are respective of the two clubs: latkes and noodle kugel from the JSU, and rice pudding and chicken from the MSA. Students were also able to play traditional games that represent the religion; for example, dreidel and Muslim board games were popular activities at the dinner.

There were two speakers at the dinner: Rabbi Michelle Goldsmith and Sheikh Abdurrafa. The speakers spoke about the similarities between the two religions: the customs, prayers, and the founders were all discussed in the speech.

Members of both clubs have praised the dinner’s ability to bring together the students whose religions have historically kept them apart. “We hope to continue the tradition,” Gorbach said.

“I personally love the dinner and want it to continue every year. Even after I am gone, I want the MSA and the JSU to carry it on,” Tareque said.